It’s probably because of the indoctrination I received growing up, but I believe Free Speech is a fundamental Right, period; no matter who’s doing it, no matter what they’re saying. If it offends you or scares you or hurts your feelings, toughen up; that’s one of the liberty priorities listed in the U.S. Constitution. In recent times, certainly in the past few years, Free Speech has been under attack like never before; there’s even an Anti-Free Speech movement now. It seems all the activism and all the power is on the Anti side, and Pro-Free Speech folks don’t know what to do about it, and subsequently, have done nothing. There are pockets of resistance, however; unfortunately, they are the most notorious, probably because the opposition is so notorious.

As circumstances would have it, I live in Washington across the river from Portland, Oregon; Ground Central for Antifa, the most notorious of the Anti-Free Speech organizations, and also nearby is one of the most notorious Pro-Free Speech Groups, Patriot Prayer, headed by ardent evangelist, Joey Gibson. In the context of Marxism being Left and Liberty being Right, Antifa is Far Left and Patriot Prayer is Far Right. Gibson ran for U.S. Senate and got 4th place while I ran for the House and got fewer votes than the autistic guy. (My goal next time is to get as many votes as the alcoholic guy.) Gibson’s organization is the Patriot Prayer Group, focused primarily on American flags and guns. He got a permit for an event in a nearby park my kids used to go to, but at the last minute, a Portland Anti-Free Speech group tried to stop him in court. Had he not had a crowd, it may have happened in bureaucratic anonymity, so I took my wife, Gwynne, and we sat in the front row making sure we were noticed. Gibson said his piece, saved his permit, and had the event without incident. I still don’t know what he stands for but it doesn’t make any difference because in America you can think what you want and say what you want, you just can’t do what you want.

Joey Gibson's avowal of non-violence combined with his audacity to schedule events in Portland puts him at extreme risk of bodily harm from Antifa. In response, the Proud Boys, a National Far Right group flies in from all over the country to shepherd Joey’s Portland events. The Proud Boys are all-male, racially integrated, bodybuilder-types busting out of their shirts. On the Saturday night before the Portland rally, Gwynne and I were dancing at one of our favorite dives when some very large young men starting packing the place. They had roosters tattooed on the sides of their necks and embroidered on their jackets.
“I think those are the Proud Boys,” Gwynne whispered but I couldn't quite make it out.
A hour later the place smelled of testosterone. I mean, these are big, big guys; young and full of it.
“U...S...A...! U...S...A...! U...S...A...!” they were chanting.
“I think these are the Proud Boys,” I speculated, using my famed deductive reasoning.
Gwynne just looked at me through half-lidded eyes. One particularly large young man came up to her and yelled, “Trump 2020!”
Gwynne smiled and gave him the thumbs up. He seemed satisfied with that, smiled and walked away happy.
I posted on Facebook that the Proud Boys were at the bar and if a 100 or so Antifa wanted to get their asses kicked, they should come by. By 10:30 pm, we were trying to dance but Proud Boys were all over the floor, good-naturedly twirling Gwynne around, and clumsily dancing with their significant others. Gwynne was afraid that my disregard for other people's personal space while I'm dancing may be a hazard in this particular crowd, and we should go home. The next day I saw pictures of the giant Proud Boys surrounded by the puny Antifa guys. One of the main credos of the Proud Boys is no masturbation; comparing their physique to Antifa, I think I know what the difference is.


Proud Boys.JPG
You do not have the required permissions to view the files attached to this post.
Mr. Wysdom
Libertyist
Scimonoce
Nonpartisan
Prof. Education
Top

Ah. The no fap pill.
Top

These ARE interesting times.
Deep down tho, I still thirst to kill you and eat you. Ultra Chimp can't help it.. - Smitty
Top

The ones I have seen are more typical gym bros than actual bodybuilders. Bodybuilders tend to have fairly low body fat percentage and an aesthetic physique. Most of the bigger PB I have seen look more like strength trainers and maybe furniture movers.

I do know if you want to get big, one way is to clean up your diet and work for a moving company for a year or two. Once your body adapts to the workload, start barbell training like you will find in the Starting Strength book.

If you don't worry about cutting fat while doing that, you'd have the PB look in 1-2 years.
Top

I have thought a bit about these matters over the years and I think PB have a lot right. Men need a gang of some kind that imposes accountability and weens them off destructive habits. The civic nationalist nonsense is where they go wrong.
Top 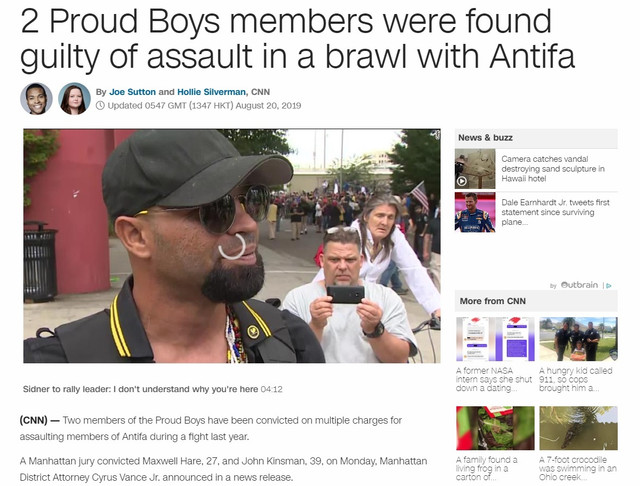 Maybe it was this one

Maybe it was this one

Bubba never even dropped the smoke from his mouth.
Top

Hare and Kinsman were convicted of attempted gang assault in the first degree; attempted assault in the first, second and third degrees; and riot in the second degree for their part in an October 2018 brawl with members of Antifa, a left-wing anti-fascist group, the district attorney's office said.

These marxist judges are throwing the book at our boys.
Top

Get the meme out that prison only makes them stronger and more dangerous to liberals.
Top
13 posts